A Closer Look at the Founder

Danyiel Louis is the Founder and President of Green Children’s House Montessori School. She has a Bachelor’s degree in Computer Science from the University of California, San Diego.  Danyiel began her career as a Software Engineering at IBM and earned a Software Patent for her innovative work.  Currently, she is an IT Business Analyst.  Danyiel is a mother of three boys and has a passion for children and our environment.  She is Montessori and Conscious Discipline trained and certified in First Aid and CPR.  Danyiel has operated GCH for over ten years and feels it is a privilege and honor to be leader in early education in our Community.

How Green Children’s House Was Started

After a stay in daycare left their son hospitalized, Danyiel, began searching for safer preschool options.

When the her oldest son was 15 months old, he spent more than 3 weeks in the ICU after developing an empyema. After the child’s hospital stay, his enrollment in several preschool facilities over the years and the birth of their second son, Danyiel and Dominique Louis decided to look into starting their own Eco-friendly Montessori School. “There are at least five preschool’s within a two-mile radius of us, but we set ourselves apart because we are the only recognized green preschool,” – Danyiel.

Danyiel have taken concern for their children, and turned it into a reality, Green Children’s House Montessori School in Pompano Beach, Florida.
Only organic and natural foods and snacks are served to students.  According to the U.S. Department of Health and Human Services, overweight children have a 70% chance of becoming overweight or obese adults.

For Danyiel, there is a dire need for quality education. “Florida schools are ranked among the lowest in the country in science, technology, engineering, and math” she says. “I want be sure my children are given the best shot at being healthy, successful individuals.” 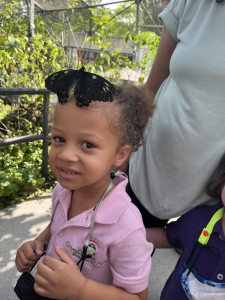 We are enrolling Toddlers ages 1 years through 1st grade and VPK.  We accept Step Up for Students Scholarships and School Readiness.